Source: Fr. John Whiteford's News, Comments, & Reflections
Archpriest John Whiteford | 04 November 2015
What is the reason for the difference in practice of churching boys, who are taken behind the altar, and the churching of girls, who are not? 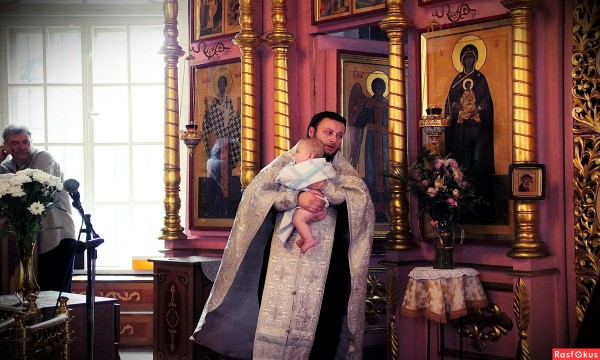 In Baptism, a person is united with Christ and His Church, and becomes a full member of the Church. The Rite of the Churching of an infant who has been baptized is the solemn act of bringing the child into the Church, and offering them to God. Baptisms are now often done inside the Nave of the Church, but historically, baptisms were either done outside (in a flowing river or lake), or in a baptistery that might be separate from the Church altogether, or which is located in the Narthex of the Church. And so, historically, after the Baptism concluded, the newly baptized was brought into the Nave for the first time.

The fact that this has been the universal practice of the Church should be sufficient to convince us that we should accept it, and pass it on without change. However, in our times, when many seek to erase all gender distinctions, many now object to this practice as being “unfair.’ And this, of course, also raises the question of having altar girls, as well as the ordination of women.

First off, it should be pointed out that there is not an absolute prohibition against women entering the altar. No one should go into the altar who does not have a blessing to do so. Normally, the altar servers are in fact all male, but in convents, nuns often serve as altar servers, as can been seen in this video which shows Greek nuns censing the Kursk Icon:

It is also true that there were deaconesses in the early church, who did not serve in a way identical to male deacons, but who did enter the altar.

As for the question of the ordination of women as priests, it is often argued that the long standing practice of the Church to the contrary was simply based on cultural prejudices of the day, and that perhaps it never occurred to the Apostles that women might be ordained. The problem with this line of argument is that while Israel had a male only priesthood, the Canaanites had priestesses, and so did the Greeks and Romans during the time in which the Early Church took shape. So clearly Christ and the Apostles made a conscious decision that Presbyters and Bishops would be males only. Not because women are not smart, or capable — because obviously they are — but because they have other roles to fill.

I was raised in the Church of the Nazarene, which allowed for the ordination of women from its founding (1908). And early on, about 20% of their ministers were women, but by the time I was growing up in that denomination, I never saw a local Church that had a woman functioning as a pastor. When I was studying to be a minister, there were some women that were also preparing for ordination, but when you asked them what they wanted to do as ministers, the ones I went to school with all wanted to do things that they could have done in the Orthodox Church without having been ordained: children’s ministry, music ministry, etc. So why is it that in a denomination that allowed women to be ordained as elders, that almost none of the women wanted to serve as pastors? Because being the pastor of a Church is a fatherly role. Like it or not, men and women are different, and they each have unique attributes that they bring to a parish that are necessary for a healthy and balanced community. Priests in the context of the Church play a fatherly role, and usually their wives, along with other strong women in the parish play a motherly role. Both roles are needed.

When I think of the best examples of Orthodox womanhood, I think of the Most Holy Theotokos, for one, who was never in the limelight during her life, but who is more honorable than the cherubim and more glorious beyond compare than the seraphim. Aside from the God-man Himself, there is no other human that has ever lived that even comes close to her — man or woman.

I also think of the Holy New-martyr Grand Duchess Elizabeth, who was a strong woman who did great things for the Church, was loved by the people, and died a Martyr’s death. She lived a life of humility and service, and was fearless in her intention to remain faithful to Christ. And while in this life she may never have entered the altar of a Church, in my parish’s altar, on the Holy Table itself, there is a relic of hers that is in our Antimins, upon which we celebrate every liturgy, and without which we could not celebrate the Liturgy at all. Whether we are able to enter the Altar in this life is not nearly as important as the space we will occupy for all eternity.