The Publican and Pharisee

“The publican, standing afar off, would not lift so much as his eyes unto heaven, but smote upon his breast saying, God be merciful to me a sinner!” (Lk. 18:13).

And involuntarily one turns to last week’s Gospel. There it also told about a publican — Zacchaeus. We saw how the Lord overturned his whole soul. We saw how, after all his sinful life, he repented; and how he was ready to give half his possessions to the poor, and everyone he had defrauded, he would repay fourfold. And undoubtedly he did this. Involuntarily, Zacchaeus the Publican and the publican in today’s Gospel blend into one image, into one person. After all, both of them were publicans, sinful men, and both repented. If we accept that today’s Gospel is the continuation of last Sunday’s Gospel, that today’s publican, beating himself on the breast, is really Zacchaeus, at least psychologically, then a great science will be revealed to us, a great lesson in the life of one who repents. You see we must all repent.

All the injustice which Zacchaeus did, he did for gain, to be dominant. And here, when this dominance came and he considered himself to be a man of power — at this very moment came the Truth of God. The Truth of God tells us that if a person is in his mother’s womb for nine months, then he abides in the womb of the earth if strong eighty years, and after this begin suffering and sickness (Psalm 89:10 (90:10 King James Version). And finally, through death man passes into the womb of eternal life for ever. 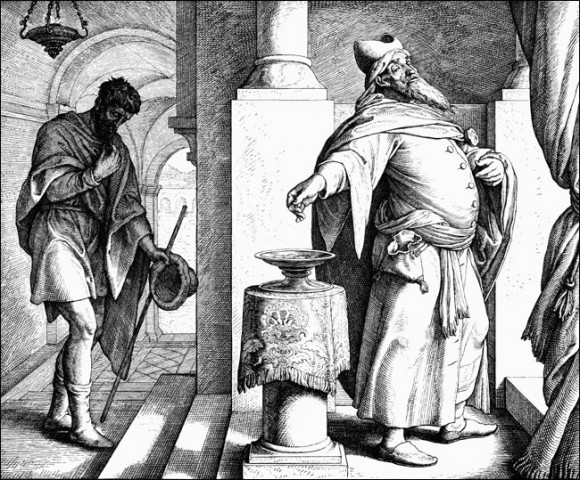 Zacchaeus saw all this now: he understood all his foolishness, his wrong way of life. And then he began to search for a way out. He was in such a state of mind when he saw Christ walking by. For him this was a rabbi. He couldn’t just go up to Him, and he didn’t want to. First he wanted to find out what kind of rabbi He was. Here we see the fig tree, then we see him in the fig tree, this man who was virtually a dignitary of the Jewish people. And then the crowd. Imagine what this proud man was going through. But Christ approached and said: Today we will be together, I will be in your home. And when Christ was in his home, then He revealed to him that power which immediately filled his heart. Here Zacchaeus said: I will give away everything, and whomever I have cheated I will repay fourfold (Lk. 19:1-10). And so he did all this.

But what is the matter now? Now he is standing and beating himself on the breast, saying: “God be merciful to me a sinner!” And here, right next to him stands someone else, maybe his peer in society — a Pharisee. He stands there and, on the contrary, in complete satisfaction says: I have done everything, I did this and this, I.. .1. Why didn’t the publican say: I also did this. I gave away half of my possessions. To that one I paid back fourfold. Why didn’t he say this? But on the contrary, he said: “Merciful God, be merciful to me a sinner!”

The point is that the Lord endowed him with a gift — He expanded his heart. But as active life resumed, then a tragedy resulted: habit…habit. His inner man was the slave of habit; and this habit was a terrible force. Involuntarily, there appeared thoughts of avarice and the thirst for more and more gain. His looks were already in temptation which came through thought. The heart which had been liberated by Christ suddenly became dirty again. And he felt all this. “Lord God, be merciful to me a sinner!” What to do?

Today the Holy Church brings us the full strength of this psychological moment, the full strength of this question: what are we to do? And with similar force, she gives us the answer to this question through the teachings of the Holy Fathers. In fact our Holy Fathers show us precisely what was going on in the soul of the publican. Because his conscience was now free, liberated by Christ, his heart was expansive, there was peace in his heart. His will was also free, and the freedom was in God. But the distance between the heart and God is sin. And here it happened to the publican that shadows started to appear in his heart, and he began to cry to the Lord for help.

How do these shadows come about? As Bishop Theophan the Recluse explains in one of his letters, they come about like this. Thought — it comes, and only if it does not captivate the feeling of the heart, then this is still not sin. It comes and, as today’s snow melts tomorrow, so it will not exist, and the heart remains clean. Even if the thought captures the heart, enters the heart — even this is not yet a misfortune; there is still a moment in which it is possible to cry, “Lord have mercy!” and the heart will be clean. But when the thought has already entered the heart, and when you have already said, “I desire,” this is when shadow appears. The mere fact that a shadow has entered, then here sympathy has already taken place, an action. Then, as the Bishop says, a fall has resulted. Sin has become action, and a fall has occurred. And as soon as one has fallen spiritually, sin has entered the heart, a deed has been accomplished, the person has departed from God and has begun to suffer, just as with a man who has fallen physically. We know what a tragedy spiritual sufferings represent. Pride, greed, ambition, all kinds of lust gnaw at a man, and he is tormented. The heart of such a man becomes like stone.

As we see from the Gospel reading, this is what happened after Zacchaeus the Publican recognized his sin and repented. Christ absolved him of his sin. His conscience became free. But now he had to act; and when he started to act, then thoughts arose, and from thoughts came feelings. What to do? Here he cried: “God be merciful to me a sinner; don’t let this happen.” And the Lord gives the Grace to prevent it from happening and saves the sinner. What must we do in order to receive this Grace? An active exertion of the will is needed. And next Sunday the Holy Church will teach us how this is acquired.