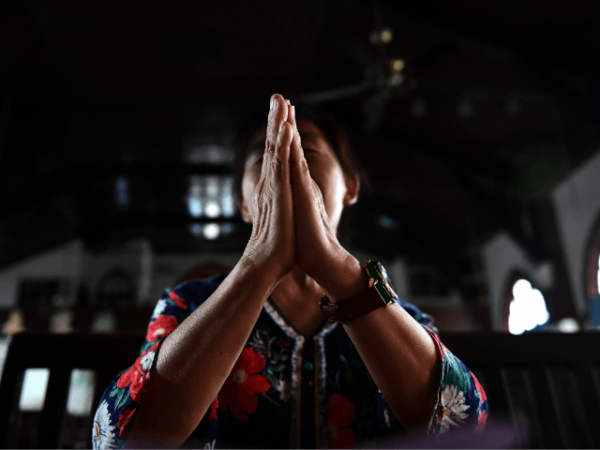 The participants in the protest, which was organized by five Christian groups and dozens of individuals, also wished to show solidarity with their co-religionists on the mainland who are suffering persecution, letting them know they are not alone.

“Christ is being persecuted … the church in China is being persecuted,” organizers said in an online invitation to protest. They have encouraged believers to wear black again next Sunday to call attention to what is happening to their brothers and sisters on mainland China.

On December 9, Chinese security forces carried out a series of coordinated raids on the Early Rain Covenant Church, one of the most prominent house churches in China, arresting as many as a hundred members, including Pastor Wang Yi and his wife.

According to Gina Goh, Southeast Asia regional manager for International Christian Concern, officials beat, tortured, and denied food and restroom accommodations to the Christian detainees. Some of the Christians were dragged along the ground, stepped on, bound to chairs, and had handfuls of hair pulled from their scalp, Goh said.

Six days later, authorities repeated the exercise on the Rongguili Church in Guangzhou, the largest unregistered church in south China. Local officials shut down the church, interrupting a children’s Bible class, and confiscated some 4,000 religious books.

The pre-Christmas raids are part of an escalating crackdown on house churches and unsanctioned Christian, as part of an effort by the Xi regime to secure absolute control over all religious activities in the country.

So far this year, there have been more than 10,000 cases of Christians being detained in China, compared with just over 3,000 cases for the whole of last year, according to Bob Fu of China Aid, a U.S.-based Christian non-profit organization.

The government has enacted amendments to the Religious Affairs Regulation, giving local officials greater power to act against churches and impose penalties for “unauthorized religious gatherings.”

Observers suggest that the communist government has become increasingly concerned over the spread of Christianity in China, which they consider to be a western — and therefore foreign — religion.

“Christianity is the largest religion on the mainland as the number of believers has increased by more than 60 per cent from some 23 million to 38 million people over the past decade, according to official data,” said Ying Fuk-tsang, director of the Divinity School of Chung Chi College at Chinese University.

“Beijing has considered it an ideology that can threaten national security and therefore even symbols of Christianity, such as decorations for celebrating Christmas and New Year scrolls carrying religious elements, are banned,” Ying said.