China Protests U.S. Criticism of Its Policies on Religion 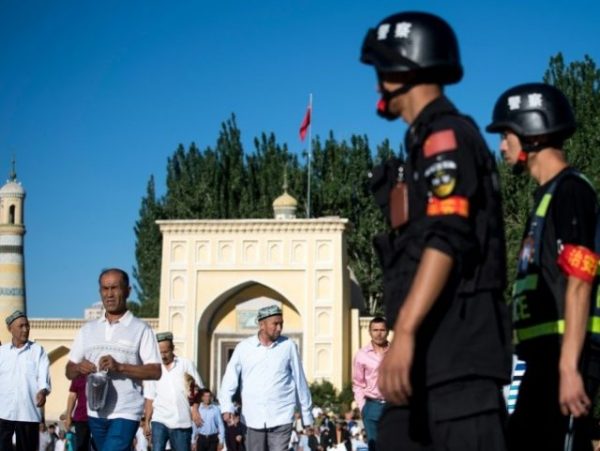 China is “at war with faith,” said Sam Brownback in a speech in Hong Kong last Friday. “It’s a war they will not win. The Chinese Communist Party must hear the cry of its people for religious freedom.”

The Chinese foreign ministry office in Hong Kong reacted strongly to Brownback’s words. “We ask the U.S. to respect the facts, stop the arrogance and prejudice and cease using religious issues to interfere in China’s internal affairs,” it said in a statement.

The ministry went on to insist that China’s constitution protects freedom of religion, urging critics to “cease their slander of China’s policies on religion and the situation with freedom of faith and cease using religious issues to interfere in China’s internal affairs.”

In his speech, Mr. Brownback targeted China’s recent actions toward Uighurs and other Muslim minorities in China, many of whom China has reportedly rounded up into political education camps in Xinjiang.

The Trump administration is “deeply concerned and considered it a deliberate attempt by Beijing to redefine and control these Muslim minority groups, (their) identity, culture, and faith,” Brownback said.

Brownback, the former governor of Kansas, also called on China to liberate Wang Yi and John Cao Sanqiang, “underground” Christian pastors who are being held for illegal religious activities.

After China complained about his remarks, Brownback told reporters in Taiwan Monday that his office has a list of hundreds of names of individuals in China who have purportedly been detained for their faith.

“Where are they? What is happening to them? Why can’t their family members hear from them?” Brownback asked.

“The United States has designated (China) in its most problematic category of countries that persecute people of faith … since 1999.  And the situation has gotten notably worse in the last two years,” he said.

“We are calling on alliances of countries and individuals to step up and to oppose these things when they take place,” he said.

This is not the first time the Chinese government has protested U.S. criticisms of its religion policies.

In 2016, China’s Communist party filed a formal diplomatic complaint with the U.S. government for what it called a biased and distorted “attack” on China’s religious policies, following the release of a damning report by the U.S. Commission for International Religious Freedom (USCIRF).

In its annual report, the Commission employed some of its harshest language to describe the situation of religious freedom in China, noting that over the past year, “the Chinese government has stepped up its persecution of religious groups deemed a threat to the state’s supremacy and maintenance of a ‘socialist society.’”

“Christian communities have borne a significant brunt of the oppression, with numerous churches bulldozed and crosses torn down,” the report declared.

According to China’s Xinhua News Agency, the nation formally complained to the United States after the USCIRF listed China as a “country of particular concern” in its annual report for its for its “systematic, egregious, and ongoing abuses,” a designation China has enjoyed each year since 1999.

“The Chinese government fully respects and protects its citizens’ freedom of religion in line with the law, and Chinese citizens enjoy the rights to full religious freedom in accordance with the law,” Foreign Ministry spokesperson Hong Lei said in a press briefing.

“The U.S. ignores this fact and releases reports repeatedly to distort and attack China’s religious policies and status. China firmly opposes the U.S. move and has lodged solemn representation to the U.S. side,” Mr. Hong said.

According to a Congressional report at the time, conditions for religious believers in China have been on a “downward trend” ever since President Xi Jinping took office.