Why is Pascha usually celebrated on a different date from the Western Christians?

Source: The official website of the Orthodox Church in America’s Diocese of New England

Three canons of the Orthodox Church deal specifically with the date of the Feast of Feasts Pascha:

1) If any bishop, or presbyter, or deacon celebrates the holy day of Easter before the vernal equinox with the Jews, let him be deposed. (Canon 7, Council of Nicea, 325 A.D.)

2) Whosoever shall presume to set aside the decree of the holy and great Synod which was assembled at Nicea in the presence of the pious Emperor Constantine, beloved of God, concerning the holy and salutary feast of Easter; if they shall obstinately persist in opposing what was rightly ordained, let them be excommunicated and cast out of the Church; this is said concerning the laity. But if anyone of those who preside in the Church, whether he be bishop, presbyter or deacon, shall presume, after this decree, to exercise his own private judgment to the subversion of the people and to the disturbance of the churches, but observing Easter at the same time with the Jews, the holy Synod decrees that he shall thenceforth be an alien from the Church… (Canon 1, Council of Antioch, 341 A.D.)

3) If any bishop, presbyter, or deacon shall celebrate the holy day of Easter before the vernal equinox with the Jews, let him be deposed. (Seventh Apostolic Canon) 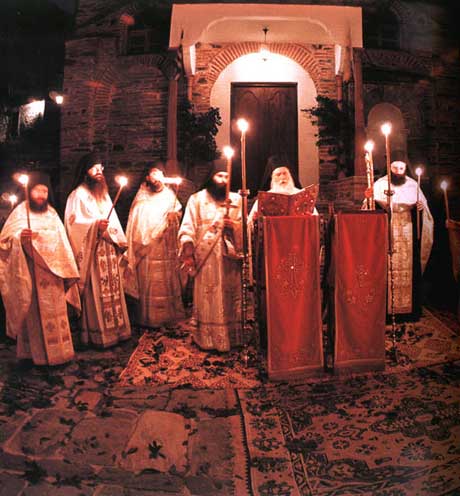 Pascha must be held on the first Sunday after the first full moon after the vernal equinox. Pascha must always be held on a Sunday, as we know from the Scriptures that the Resurrection took place on that day: “Now on the first day of the week (i.e., Sunday) Mary Magdelene came to the tomb early, while it was still dark.” (John 20:1)

The first full moon of the vernal equinox is known as the 14th of Nisan in the lunar calendar used to calculate the date of Pascha. Pascha is supposed to fall on the first Sunday after the 14th of Nisan.

The component requiring that Pascha be celebrated “after the vernal equinox” simply ensures that we would never celebrate Pascha twice within the same seasonal year (i.e., it always falls after the beginning of Spring, even if the date from one year to the next is earlier).

It should be noted, however, that to ensure that all Orthodox Christians in the world are celebrating Pascha together on the same day, we calculate the vernal equinox according to the Julian (old style) Calendar, since some Orthodox Churches still use the Julian Calendar exclusively (most notably the Orthodox Church in Russia). So what we see on our Hallmark calendars as the vernal equinox on March 20 this year is really, for Orthodox paschal calculation purposes, April 2nd (thirteen days later).

We are not to “celebrate with the Jews.” This is the most difficult and misunderstood component of the formula. The actual Greek text of the Canons says “meta ton ‘Ioudaion.” The meaning of the Greek text is not that we must calculate our date of Pascha so that it falls after the Jewish celebration of Passover, but rather, precisely the opposite. It means that we should not take into consideration at all the Jewish paschalia. The custom in our Church, of course, has been to make sure that Pascha falls on the first Sunday after the first full moon, after the vernal equinox, as long as Passover is completed.

D.P. Ogitsky, Professor of Canon Law at the Moscow Theological Academy, posits that this tradition in our Church of celebrating Pascha after the Jewish celebration of Passover is incorrect.

The canons really are telling us not to concern ourselves at all with the Jewish paschalia. Professor Ogitsky goes on to say that the most correct formula for determining the date of the Christian Pascha would be that it fall on the first Sunday after the 14th of Nisan (the first full moon after the vernal equinox), which would ensure that it fall between the 12th and 18th of April each year (assuming we calculate the astronomical reality of the vernal equinox, instead of an artificial “Julian Calendar” date) with a few occasional variances, the latest being April 26th. As our current tradition stands (concerning ourselves with the Jewish paschalia), the latest day we can celebrate Pascha is May 8th.

It would seem, after some reflection, that we may be celebrating Pascha on the incorrect date. Both Orthodox and non-Orthodox Churches use the exact same formula to calculate the date of Easter. However, the Western Christians use the actual vernal equinox when calculating the date. We Orthodox use a calendar that was proven to be astronomically incorrect generations ago. That calendar grows more incorrect with the turn of the century, as the difference between the two calendars grows from 13 days to 14 days (even Christmas will no longer be January 6th it will be January 7th on the “old calendar”).

My personal opinion? It seems logical to me that we calculate the date of Pascha being faithful to the intent of the canons (by ignoring the Jewish paschalia, the date of which, coincidentally, is currently debatable as a different system for calculating that date is being used by the Jews compared to centuries ago) and also by using a realistic calendar a calendar that we use to schedule literally everything else in our lives. This would, at least, allow us to celebrate on the same day as the rest of the world. That of course, is not my decision to make, nor even a decision the Orthodox Church in America could make. It would have to come as a corporate decision of the Orthodox world.