The Intercession of St. Nicholas in Our Days 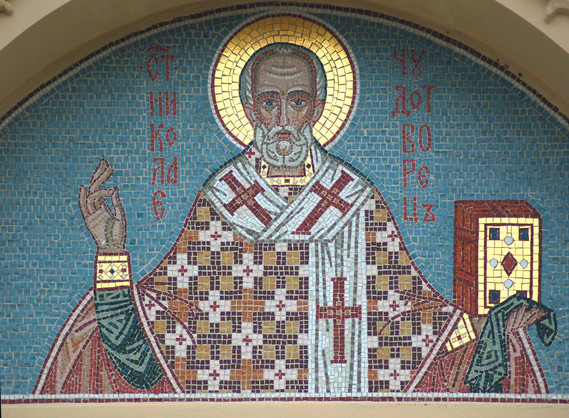 On this day dedicated to the memory of St. Nicholas the Wonderworker, Archbishop of Myra in Lycia, we offer the reflections of three priests, each of whom is the rector of a church dedicated to St. Nicholas in Russia, about the role played by the saint in their lives and in those of their parishioners.

St. Nicholas Day is a feast day for me personally: after all, I bear his name and come under the protection of his prayers. It was a very great joy for me to go on pilgrimage to the place in which he lived, Myra in Lycia, as well as to his relics in the city of Bari. Later, life worked out in such a way that I became the rector of the Church of St. Nicholas at Tolmachy, which is attached to the Tretyakov Gallery, home of that great sacred object, the Vladimir Icon of the Mother of God. And, providentially, a portion of the saint’s relics was transferred to our church.

On the day of my appointment I was blessing an apartment in Moscow, where I was presented with an icon of St. Nicholas. I did not know at that time about my appointment as rector of the church. The news greeted me as I was standing with the saint’s icon in my hands at home. I came with this icon to the church, when desolation and devastation reigned and there was not a single icon.

What can I say about St. Nicholas himself? Everything in our lives is arranged by his prayers. When one turns to him with sincerity, he will help. He is always nearby if we endure sincerely and behave worthily. The wonderworker intercedes for us in the most unforeseen situations.

One of our parishioners told of how in the post-war years there was an exhibition of paintings that had been returned from the Dresden Gallery. Getting in was impossible; people stood in line for days. Then suddenly an old man turned to her, calling her to follow him. He led her through cordons where they did not ask her for either tickets or an invitation. When they had reached the Sistine Madonna and she turned to thank her escort, he was nowhere to be found. This is how the saint can help when one is least expecting it. During the Great Patriotic War [WWII], the father of a good friend of mine fell through the ice; naturally he was in full uniform, in his greatcoat. He had no way of climbing out by himself. Soldiers were running past him (either advancing or withdrawing), but they did not notice him.

Then he began to pray: “Lord, help me! St. Nicholas, intercede on my behalf before the Lord!” He promised that, if lived and had a son, he would name him Nicholas. Suddenly two soldiers who were running past stopped and helped him get out. This man lived and named his son Nicholas. It was this son, who is already an older man, who told me this story.

There are many different cases of miracles attributable to the protection of St. Nicholas in the lives of many, many people. It is no accident that there is a folk saying that goes: if you want the Lord to hear your request, tell it to St. Nicholas.

As the rector of a church dedicated to St. Nicholas, I have constantly experienced – and continue to experience – the saint’s help from the day we started building our church, which is now nine years old. We went to the place where the church was to be built and served a moleben [supplicatory service], glorifying St. Nicholas and asking for his help.

Miracles took place before my eyes as construction progressed in remarkable fashion, even when it seemed that all kinds of restrictions were being put in place to stop it. All these difficulties were miraculously resolved.

The birth of my youngest son, who is now a year and a half old, is another of his miracles. It is no accident that I have named my son Nicholas. My grandfather, who was a priest in Moscow, served in a church of St. Nicholas. And his son, my father, was named Nicholas. My own son and two of my grandsons also bear this name. Every church in which I have served has had a side chapel dedicated to the saint, and indeed the church of which I am now rector is also dedicated to St. Nicholas.

Does the saint hear us? Of course he does. When someone from the parish is having trouble, we pray to him and receive help. And the fact that our parishioners name their children after the saint also speaks to his special veneration.

Of course, in my life I have encountered many miracles performed by St. Nicholas. For instance, once a completely non-church person came to visit us. He told us that, as a rigger, he worked at great heights. Once he fell, and was left dangling on wires. At that moment an old man appeared to him and told him what to do next. Thanks to him, the worker was saved. Later, when this man came to our church, he recognized this old man, pointing at an icon of St. Nicholas.

You may also enjoy:

St. Nicholas, Santa Claus, and the Nativity: An Interview with Metropolitan Hilarion (Alfeyev)

St. Nicholas the Wonderworker or How to Form Our Lives on the Basis of Faith

Most viewed articles
Patriarch Kirill: Not Only People, But Churches Too, Can Depart from God215
A Christianity of the Catacombs180
The Truth About Riches106
Thoughts on Theophany and Revelation104
Archbishop Makarios of Australia: ” the Great privilege of the Orthodox Church is that we live in communion”67
Metropolitan Onuphry Speaks on How to Protect One’s Soul From Sin46
Most millennials, Gen Z adults support bans on abortions when baby’s heartbeat is detected: poll27
How to live the Spiritual Life (Part I)1
Most popular authors
Pravmir.com team355
Archpriest Lawrence Farley180
Fr. Gabriel Bilas106
Elissa Bjeletich104