Source: OCA
Archpriest John Breck | 09 October 2015
Biblical accounts, often shaped by ancient myths, are based on facts: actual past events in the history of God’s people. They are important for us, however, only insofar as their meaning, their ultimate significance, extends from the past into our own present life and experience. 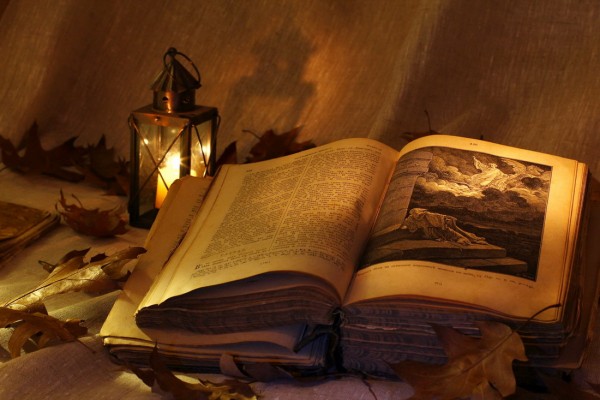 For over a century biblical scholars have debated whether the Old and New Testaments contain “mythical” elements. The answer depends on how we define “myth,” and here there is very little agreement. The Brothers Grimm held that myths are stories that speak of “gods” (in the plural). If this is the essential criterion, many scholars have held, then there can be no myths in the strictly monotheistic Hebrew Scriptures. In any case, they argue, whatever ancient mythical elements might have influenced Old Testament traditions have been thoroughly “demythologized” and rendered “historical.”

Recent research into the mythology of Ancient Near Eastern religions (Egyptian, Mesopotamian, Canaanite) has shown that myths develop around a people’s religious rituals and demonstrate a fairly consistent pattern. Beginning with a particular conflict (the hero, for example, does battle with a monster who represents chaos), the mythical story recounts the defeat or destruction of the protagonist, then passes to a description of the people’s lamentation (mourning the hero). In the final stage, the hero is “reborn,” rising from death and defeat to new and exalted life. This pattern of conflict, death, mourning, and vindication seems to have originated in agricultural societies, where ritual performances reenacted, and hence promoted, the rebirth of vegetation in the spring of the new year.

This pattern unquestionably influenced the development of certain Old and New Testament traditions, just as it did various Hellenistic mystery cults. One can find such movement, for example, in several of the stories included in the first eleven chapters of Genesis (especially the Noah cycle; compare the fate of Job), and even in the life of Jesus (conflict with religious and political authorities, judgment and crucifixion, lamentation on the part of the disciples and faithful women, followed by resurrection). The Old Testament, and to a limited extent the New Testament (particularly the Book of Revelation), do reflect certain universal mythical themes. It is important to stress, however, that the Bible is essentially free of myth per se, since these underlying influences have been transformed by the essentially historical interest of its various authors.

This primary concern of the biblical authors led them to modify traditional mythical motifs in very significant ways. Most importantly, the chief actor or subject of the biblical writings is God, rather than multiple gods, a hero or a king. As with much ancient mythology, Israel’s popular stories are often etiological: that is, they explain the occurrence of specific actions or things in the life of the nation such as ritual celebrations or natural phenomena (the autumnal New Year festival, for example, or the pillar of salt, Genesis 19:26). In any case, the presumed historical events behind these accounts are presented in such a way as to offer a theological interpretation of those events. A good example is the Exodus tradition(s) [compare Exodus 1-15 with Psalms 77/78 and 80/81]. Here, underlying mythical elements (conflict, destruction, rebirth) have been reshaped to proclaim through the written account the truth of God’s saving activity in and for His people Israel. The result is a ritual retelling, and thus a reactualization, of what actually occurred in the framework of Israel’s salvation history.

We take it for granted that historiography will record for us an accurate picture of “what really happened,” events that are demonstrably factual. To the Israelites, however, the aim of written “history” is not primarily to record facts or provide a record of actual past events. Their sagas, for example, convey above all theological and spiritual meaning for the present. Those epic stories (e.g., of Noah or the Patriarchs) are built on an indispensable, if irrecoverable, kernel of historical reality. Their true significance, however, lies in their ability to relate that past event to the present life of the people. History for the ancient Israelites is meaningful only to the extent that it is living history, extending, as it were, from the past into the present life of the people. Accordingly, the Hebrew concept of “remembrance” signifies reactualization: to remember the past is to experience its conditions and challenges in the immediate present.

This perspective is troubling to many people because it seems to throw into question the “historicity,” the historical reality, of much of the biblical tradition. Yet the reason it does so is because we misunderstand the true meaning and function of myth. In today’s parlance, the term myth implies “fable,” “folklore” or “legend”: a story with no historical underpinnings that serves to convey a moral lesson or simply to amuse. Applied to Scripture, however, the term myth properly describes a tradition that uses human language and images to express the ineffable interaction between the immanent and the transcendent, between God and His human creatures. The myth, rooted in actual historical occurrence, interprets that occurrence (an element of salvation history) so as to convey its meaning for us in our own life and experience. This does not mean that we have to call into question the historical grounding of that event. It means, rather, that the ultimate significance of an event lies less in its being a fact of the past than in its continuing influence in our life and faith today.

To give an example, the accounts of Jesus’ birth (which differ considerably between Matthew and Luke) clearly reflect ancient traditional, and arguably mythical, themes. These include the appearance of the star (the heavenly portent), the Magi and angelic host (representing powers of earth and heaven), even the virgin birth (a phenomenon not limited to the Gospels). This does not mean, however, that those accounts are to be dismissed as non-historical. It means, rather, that what is historical is interpreted by the very shape of the stories, so as to proclaim the gospel. The meaning expressed by those canonical stories is unique. It was unique for the earliest followers of Jesus, and it remains unique for us today, as a promise of God’s full presence in the person and future ministry of the Christ-child. (Orthodox theologians will hold that those extra-biblical parallels that preceded the Gospel accounts were inspired by the Holy Spirit as prophetic announcements of the actual events surrounding Jesus’ conception and birth.)

Turning to the passion and resurrection narratives, it is true that we find mythical images of dying and rising gods in ancient mystery religions. But the details—the entire movement leading from the condemnation and death of the Son of God to His ultimate vindication—have no parallel anywhere insofar as their final meaning is concerned. Here, as with the birth narratives, the biblical authors have as their primary intention to relate the past to the present. They proclaim what Christ’s death and resurrection mean for us. As much as any other real event, they declare, the victory of Christ is historical. His resurrection from the dead, which destroyed the power of death, is a fact: it is an actual occurrence of the past. Yet it is one that has enduring value—eternal value—for us in our own present experience. And therein lies its unique and ultimate significance.