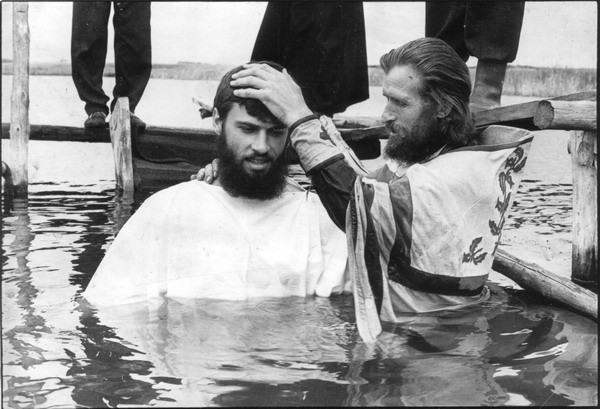 Nowadays, children get baptized for any number of reasons: because their family is Russian (Ukrainian/Greek/Serbian, etc.), because it is what they have “always done,” because the grandmother insists, because the parents want the child to be able to take communion or to go to Sunday school, or for any number of other reasons. But the Apostle Paul says that baptism is a manifestation of Christ’s death in our lives (Rom. 6:3)–no, no, not a symbol of His death, not a theatrical re-enactment, not a remembrance, but the “making-real,” the “making-present” of His death. Paul says that the baptized “put on Christ” (Gal. 3:27)–but what kind of Christ? The one who was tortured. The One who was crucified. The One who died. The One whose wounds did not heal even in His glorious resurrection (Luke 24:39).

The fundamental vision of Christ’s death in our lives begins with the full acceptance of our own physical death. Unfortunately, here in the U.S., we have outsourced our death to various companies and are not acquainted with it anymore. Not all that long ago, people would die in their family homes, surrounded by several generations of relatives. Their bodies would remain in the home, in full view of everyone, for as long as was practical. Young siblings would die of disease, adult relatives would die in accidents, older people would dies of old age… Death was all around, it was real, tangible, visceral. Nowadays, babies no longer die, and if they do, it happens in neonatal ICUs; adult deaths are whisked away and disposed of; old people are hidden in hospices. Relatives come to visit hospice patients and say the strangest things: “How are you feeling? Hope you get well soon. You and I are gonna go fishing together!”–knowing very well that the person has a few days or hours to live, but being in denial all the same, denying the loved ones the right to say: “I am dying. Pray for me. See you on the other side.”

When the death is finally undeniable–that is to say, when the person is actually dead–they still try to deny its reality: they embalm the body to prevent natural decay, they decorate the dead body with makeup and dress it in nice clothing and spray perfume; by the time they are done with it, this dead body looks and smells far better in the coffin than it did in real life! All is fake, all is denial, all is pretense. It is as if Christ did not suffer and did not die. It is as if one minute He is teaching and preaching, and the next minute He is risen. But it does not work that way. In order for there to be Pascha, there has to be the Cross; in order for there to be resurrection, there has to be death. He, who has not died, cannot rise from the dead.

A Christian is to die every day, day after day, even minute after minute, for 525,949 minutes each year. The death that we accept at baptism is not symbolic at all; it is as real as the life that we accept. The life in Christ is no symbol, and neither is the death. Both are an ever-present reality of our condition. If we want to be living, we have to bedying. Christ’s death did not happen on that Good Friday. It was ever-present since at least before He agreed to create Adam. Maybe, this is the mystery of the Son’s ever-being-born–He is also ever-dying for the sins of mankind. A Christian’s death is not something that is “symbolized” when he is “dunked” in the font, but is something that he puts on as his very essence, his nature–the nature of life in Christ.

In this context, Christian asceticism is foundational to Christian life and is the very core of our daily dying in Christ–dying to sin, dying to the world, dying to self, in order to be born in Christ to the life with God. As Christians, we are called to live our life as a sacrament, or, even better, as a sacrifice.

I think that one very troubling modern phenomenon deserves special attention: the phenomenon of morphine. Modern Americans most often seems to die in one of two ways: in hospice care or at a hospital. In both cases, the relatives often go through a denial of the approaching death and do not call the priest until the very last moments when it is already too late. By that time, the person is pumped full of morphine–either because they have become “restless” or because they are in pain. At that point, it is impossible for the person to have a confession, to pray, to take communion, or to hear words of comfort from the reading of the Psalms or the Gospel. Very often, these are also the people who have never had a confession or taken communion in their entire life or in the last several decades of their life–chronic illness, lack of mobility, extreme busyness of the relatives are some of the realities of the life of an older person that tend to prevent them from participating in the sacramental life of the Church. Thus, modern ways of dying in the “comfort” of morphine coupled with the lack of understanding of the progression of dying and the reality of death on the part of the relatives, deny these people their last rites even before death. It is as if the devil has successfully kept those people away from church sacraments during their life and has won a victory even in their death. Or, maybe, it is not “as if”? maybe, this really is what is happening?