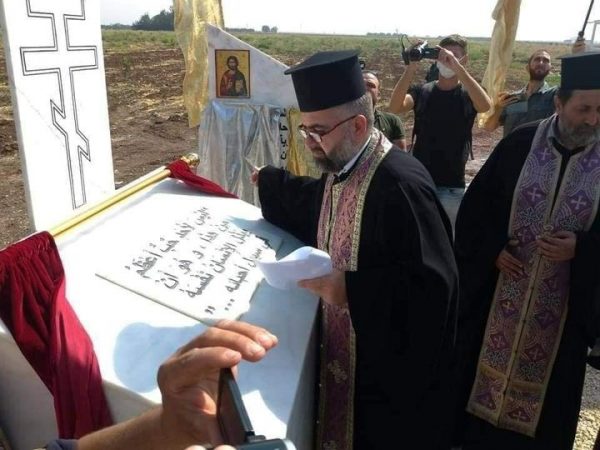 The city of Al-Sqaylabiyeh in western Hama witnessed the foundation of the stone laying ceremony for the symbolic Hagia Sophia Church, which will be a replica of the mother cathedral of Hagia Sophia in Turkey.

The ceremony was held in the presence of Syrian and Russian officials, in addition to religious figures from the people of the region.

It was written on the foundation stone of the symbolic church:

“During the reign of President Bashar Hafez Al-Assad, President of the Syrian Arab Republic, the blessing of the Bishop of Hama and its subordinates Nikolaos Ba’albaki and the blessing of the Russian Federation represented by the commander of the Russian forces operating in the Syrian Arab Republic, General Alexander Yuryevich Chaiko, laying the foundation stone of the Hagia Sophia Church, introduction From Nabel Shafiq Al-Abdullah, on the authority of the martyrs of Sqaylabiyeh, Syria, and its allies, and a tribute to the Great Hagia Sophia.

This step was supported and blessed by the Orthodox Christian religious leaders in both Syria and Russia, and they considered it a step of solidarity with the mother Church of Hagia Sophia, and an assurance that the Turkish President will not be able to obliterate the features of this global impact on the list of UNESCO, which played a central role in Christian history over the course of 1500 years old.”

Last July, in a move that sparked international religious and political criticism, the Supreme Administrative Court in Turkey annulled the government decree issued by the modern Turkish state in 1934 to convert Hagia Sophia from a mosque to a museum, based on what was described by historical documents confirming the purchase by Sultan Mehmed the Conqueror of the Hagia Sophia building before it was converted into a mosque.

Most viewed articles
A Great Time to Join the Orthodox Church279
First Church in the Antiochian Archdiocese Named for St. Xenia of St. Petersburg Prepares for Feast Day116
The Way of Christ Is The Way of Love82
My World’s Different78
Metropolitan Hilarion: the Church and traditional confessions have done everything possible to improve the situation in Kazakhstan73
Brooklyn Street Co-Named for Antiochian Pastor Who Served a Half Century There72
Patriarch Porfirije of the Serbia: Our Position on the Church Issue in Ukraine Has Not Changed48
4-400×6001
1
Most popular authors
Frederica Matthewes-Green279
Pravmir.com team237
Fr. Theodore Stylianopoulos82
Protopresbyter Themistoklis Mourtzanos78
Peter Samore72