Source: Breitbart
Thomas D. Williams, Ph.D. | 30 November 2018
Landmark buildings around the world have been lit up in scarlet for “Red Wednesday,” an annual commemoration of persecuted Christians throughout the world. 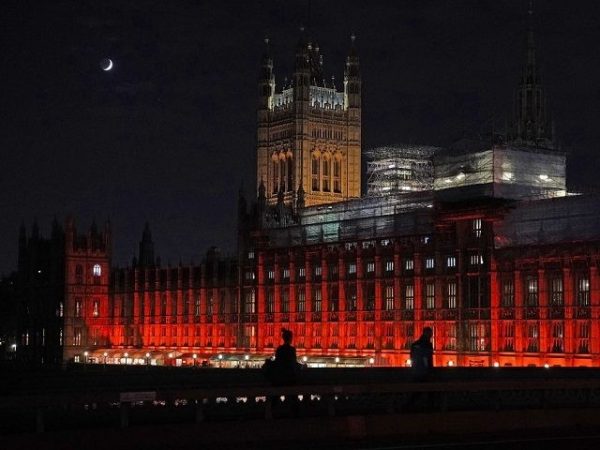 The #RedWednesday event is an initiative of the UK chapter of Aid to the Church in Need (ACN), which has partnered with Christian Solidarity Worldwide (CSW), an NGO that promotes the right to freedom of religion.

Among the dozens of noteworthy edifices bathed in red light Wednesday are the Roman Colosseum, Westminster Cathedral in London, the Basilica of the National Shrine of the Immaculate Conception in Washington, DC, Westminster Abbey, Lambeth Palace, the Cathedral of Saints Peter and Paul in Philadelphia, and St. Mirin’s Cathedral, in Paisley, Scotland.

Along with the scarlet-lit buildings, prayer services are being held in different parts of the world to ask God for grace and strength for Christians persecuted around the globe.

“By joining us in prayer, by wearing red, lighting your church red, by organising red-themed activities or attending #RedWednesday events,” event organizers state on their website, “you will be doing something peaceful and positive to highlight the suffering – injustices, discrimination, violence, oppression, torture and death – of so many Christians and others today which goes largely unnoticed by the world.”

Currently, some 300 million Christians around the world face active persecution in their countries, subject to violence, harassment, arrest, and other human rights violations, while nearly 200 million more suffer discrimination.

Christianity is “the most widely targeted religious community, suffering terrible persecution globally,” according to a major study carried out by the University of Notre Dame’s Center for Ethics and Culture, the Religious Freedom Institute and Georgetown University’s Religious Freedom Research Project.

The study, titled “Under Caesar’s Sword,” reported that Christians around the world suffer persecution at the hands of both state and non-state actors.

“Among the state actors are Islamist, Communist, religious nationalist, and secular regimes, while non-state actors include violent religious extremists,” it stated.

According to ACN’s John Pontifex, #RedWednesday wishes to, “shine a light on those parts of the world where Christians and others are persecuted for their faith and where it’s clear that not enough attention is being given to their plight.”

The color red was chosen because it is the color or blood, and symbolizes martyrdom for the faith. “So, we’re thinking of all those who carry their cross in a time of enormous difficulty and who sometimes have to pay the ultimate price,” Mr. Pontifex said.

Most viewed articles
The Tangled Web98
Love Endures When All Else Fails70
His Beatitude Patriarch Theophilos III of Jerusalem and All Palestine visits Russian Gethsemane69
The Joy of Giving and Serving Others68
Patriarch Daniel: The Tabor Light, perceived by the Hesychasts, is sought by every Christian enlightened at baptism57
Church Damaged during WWII Restored in Serbia46
First Virtual Museum of Roma Holocaust in Romania, Created by MNIR37
Restoring Our Humanity Through the Eucharist14
Most popular authors
Pravmir.com team115
Archpriest Stephen Freeman98
Aurelian Iftimiu94
Archpriest Basil Ross Aden70
Priest Luke A. Veronis68
Fr. Gabriel Bilas14