Sergei Stepashin: “A Whole Program Has Been Developed to Protect Christians in the Near East”

Source: Pravmir.ru
Natalya Mihailova | 14 November 2014
November 12, 2014. Sergei Stepashin, Chairman of the Imperial Orthodox Palestine Society, delivered a speech on systematic efforts aimed at protecting Christians in the Near Eastern countries, which are now in a state of war, on November 11. 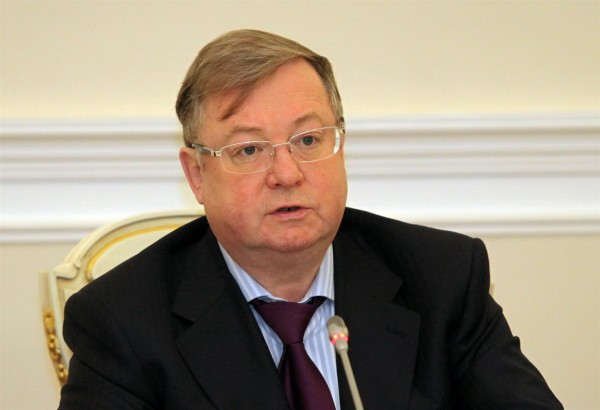 The Blagovest-Info website has reported that Mr. Stepashin delivered his speech during a panel discussion titled “The Near East on Fire: Who Will Protect Christians?” held during an exhibition entitled “Orthodox Rus’” at the Moscow Manege, in which he noted: “Consolidating the efforts of the Foreign Affairs Ministry of Russia and the Imperial Orthodox Palestine Society, with the blessing of the Russian Orthodox Church, we have developed a whole program aimed at protecting Christians in the Near East.”

Mr. Stepashin reported on a negotiation process with high representatives of the Roman Catholic Church aimed at combining efforts in this field.

On behalf of the Imperial Orthodox Palestine Society, fugitives are being helped in various aspects. For example, it is the extent of humanitarian supplies (eleven large-tonnage vehicles) for fugitives in Syria, which were gathered using the funds of the Society and with the help of parishioners of the Russian Orthodox Church. Mr. Stepashin noted that the Patriarch of the Antiochian Church had put much effort into the allocation of this aid at the places. According to the chairman of the IOPS, it is expected that a large amount of humanitarian supplies will be sent to Palestine by the end of this year.

In addition, following the traditions of the founders of the IOPS, current chairmen of this ancient organization have begun the construction of Russian schools on the Holy Land. For example, 500 boys – residents of Bethlehem – started to attend a new school on September 1, 2014, in which they will learn, among other subjects, the Russian language and its culture.

There is another aim of the Palestine society’s activities, which is the participation in a negotiation process dedicated to combine efforts in saving suffering residents of Syria, Iraq, and Lebanon. It is referred to negotiations with both Vatican and Islamic leaders of these countries. A significant aspect of these activities is “a breakthrough of the information blockade” in the domain of international human rights organizations. The IOPS initiates international conferences with the participation of representatives of the persecuted religious minorities of the Near East for this purpose.

Many participants of the panel discussion – among whom were clergymen, social and political figures, diplomats, and scientists – expressed considerable concern for the situation of civilians, who are suffering from military actions in the countries of the Near East.

Archpriest Nikolai Balashov, Deputy Chairman of the Moscow Patriarchate Department for External Church Relations, shared his concern, saying: “The presence of Christianity in the Near East may disappear completely in the foreseeable future… This will result in drastic changes in the life of all human society.”

Father Nikolai stated that over half a million Christians have already been forced to leave Syria, the presence of Christianity in Iraq “has extremely withered”, and “the situation in Lebanon is even worse”. He stressed that radical groups, supported by the Western countries, have unleashed “a religious war”: they destroy and expel not merely Christians, but also missionaries of moderate Islam, and demolish churches and mosques.

The archpriest noted that continuing efforts of Russia in protecting Christians and other fugitives in the Near East draw approval of Christians of different denominations. In particular, the results of a recent visit of Metropolitan Hilarion of Volokolamsk to Vatikan testify to this fact. “We feel a growing mutual understanding with the Western Christians, many of whom perceive the destruction of Christianity in the Near East with a heavy heart,” Father Nikolai noted.

Most viewed articles
Fleeing To The Desert, A Little Bit160
The Worst Year Ever – Or Was It?138
El Mundo Includes Russian Orthodox Cathedral in the Six Most Beautiful Churches of Madrid117
Resentment, Guilt, Forgiveness: What Should Everyone Know About Them?110
Patriarch Kirill Speaks on the Power of Epiphany Holy Water104
South Carolina Passes Pro-Life Bill That Takes Aim at Roe V. Wade60
Orthodox Service “Mercy” to Open a Rehabilitation Center for Homeless49
Orthodox organization invites children to strengthen faith through a short film competition28
The Transfiguration of Our Lord and Savior Jesus Christ1
Sunday of the Samaritan Woman1
Most popular authors
Pravmir.com team270
Archpriest Michael Gillis160
Archpriest Geoffrey Korz138
Konstantin Olkhovoy110
Madison Ferguson60
Ștefana Totorcea28
Fr. Gabriel Bilas1