The Heart of a Fallen Woman

A bit more beauty, a bit less conscience, and a slippery life’s path for a woman is ensured. And if there’s a lot of beauty? And if conscience isn’t completely lacking, but has fallen silent, deafened by the noise of songs and street music? Then there’s trouble. Then the name given in honor of the Mother of God won’t help.
Archpriest Andrei Tkachev | 01 April 2012

A bit more beauty, a bit less conscience, and a slippery life’s path for a woman is ensured. And if there’s a lot of beauty? And if conscience isn’t completely lacking, but has fallen silent, deafened by the noise of songs and street music? Then there’s trouble. Then the name given in honor of the Mother of God won’t help. The name, Mary, will remain a blessing, but life will be foul, stuffed full of nasty delights – which, God willing, will in time be spewed out. 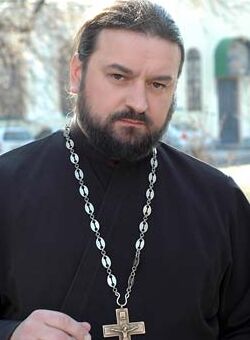 Every story has a back-story. In the given case it’s unknown to us. We know neither her first seducer, nor the reasons for her early departure from home. Even the subsequent journey downwards, into the gaping jaws of hell, is described only in general terms. One cannot write of it in more detail, lest the sun grow dark and the earth shake under the feet of the narrator. Just a few strokes, like a skillful pencil sketch: fornication, long years of furious debauchery, a multitude of filth – all lodged in just one soul. Indeed, the human soul is deep: deep in its sanctity, deep in its fallenness.

But marvelous, too, is the Providence that watches over us. Were there really so few shrines in Alexandria before which one could bathe oneself in tears of repentance? Was it really necessary to sail to Jerusalem, and specifically to the Holy Tree?

It was necessary to fulfill the words of the Fathers, who said: “By no means live where you fell into debauchery.” Although Mary didn’t read or hear the Fathers, the law of salvation concerned her as much as anyone else.

The wind fills the sails. The ship creaks, banking under the blows of the waves. One of the ships furrowing its way through the Mediterranean Sea was full of pilgrims holding course for the Holy City to venerate the Cross of Christ.

When going to church, one should pray and warm the heart while on one’s way, so that the services don’t pass one by. The same thing applies to pilgrims. They need to sing psalms, read the Gospel, and think about the Cross, which they extol and sprinkle with tears. But on this ship there is no piety. It’s been disrupted by an incidental passenger: a young woman with eyes glowing like embers. A crowd of young men follows her, old men accompany her with long gazes, and a tantalizing scent of dissolution comes from her, keeping all the men from sleep.

Someone could’ve said: “Lord, why do You not put to a just trial this fallen woman? Who has ever heard of debauchery among pilgrims?” But man sees only what he sees, while the Lord beholds the future. Glory to His wisdom and longsuffering!

The ship came ashore, and the pilgrims stepped foot on solid ground. Streams of people flowed to the place of the redeeming Suffering, where the Empress Helen had built a church. Mary also went. She went for the company, not out of love. But Someone’s hand, firmer than any paving stone, suddenly rested against Mary’s chest, preventing her from entering the church. 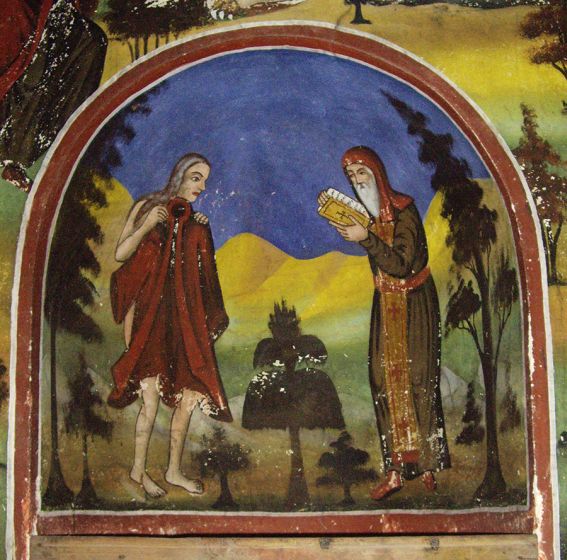 There was confusion and struggle. Then, inner comprehension and horror. Then, prayer to the Theotokos, whose name she’d so long borne without thought of her. Then the Hand abated, and it became possible to enter the church in order to bow down before that place from which forgiveness shown forth on all sinners.

The blood filling Christ’s eyes on the day of His suffering prevented Him from seeing. Tears prevented Mary from seeing. In tears she left the church, and in tears she swam across the Jordan. How much weeping is now needed, to be cleansed of the filth that has accumulated over many long years? To stop weeping is impossible. Just as soon as the well of tears dries, a memory is resurrected and thoughts strike the soul’s home like evil gusts of wind. Thoughts will drive one back into the world; they’ll depict the horrors of a solitary life; they’ll bite into the soul like predators; they’ll turn one into an animal at the end of its tether.

Weeping is necessary. Tears cleanse, comfort, and protect. And she wept. For many years.

A long time later we find Mary a saint, an aged woman praying for the entire world, desirous of receiving Communion because she sensed that her end was near. She quotes Scripture, not having read a book; she is raised an arm’s length above the ground in prayer; she knows Zosima and the abbot of his monastery by name. Oh, how beautiful is holiness! How attractive and riveting is its image! But with what did she purchase it? What did she give in exchange for the forgiveness of sins and the power of working miracles that came later? If we were to spend a single day alongside Mary, living as she did, we’d run to the nearest village by the next morning, likely never again to return.

Oh, wicked age and generation of spiritual captives! Our entire faith lies in lulling ourselves with the hope of forgiveness, but we don’t cease sinning. To reign without being crucified is our deepest desire.

There’s always been much debauchery in the world. It seems so inescapable and ubiquitous that people shrug their shoulders and ask: “How else?” But, at the same time, a great thirst for repentance and God’s forgiveness lives within the heart of a lecher. If there is anyone who is prepared to crawl on his knees to Jesus and wash His feet with tears, it’s precisely the person who’s sullied himself a hundred times over with debauchery. Others have an easier time coming up with excuses. Others even try to take pride in some part of it.

Of course, in the army of the servants of fornication, there’ll always be at least one Mary. And even that’s not certain. But repentance continues to be proclaimed in the world, and the repentant publicans and harlots, as before, will enter the Kingdom of Heaven before the Pharisees. This is how it must be until the day of the Last Judgment.

O Merciful Lord, Who came not for the healthy, but for the ill, do not cease to rest an invisible hand against the chest of the next profligate man or woman in line! Do not cease to halt at the threshold of the church, at least temporarily, those who are known to You, that their conscience might awake and that they might begin to shed tears of repentance!

And we sincerely ask you, Venerable Mother, namesake of the Theotokos, that you pray for us all! For it is rare that one can find anyone who does not bear the pus of debauchery in his bones, and no one prays to God for men and women repenting of fornication as do you.

A Saint’s Cloak by Janice Bidwell

Mary of Egypt, Facebook, and Dreams by Priest Thaddaeus Hardenbrook