Source: In Communion
Priest Luke A. Veronis | 19 March 2017
This sermon was preached by Fr. Luke Veronis on the Sunday of the Cross, March 30, 1997, at St. George Church in Durres, Albania. 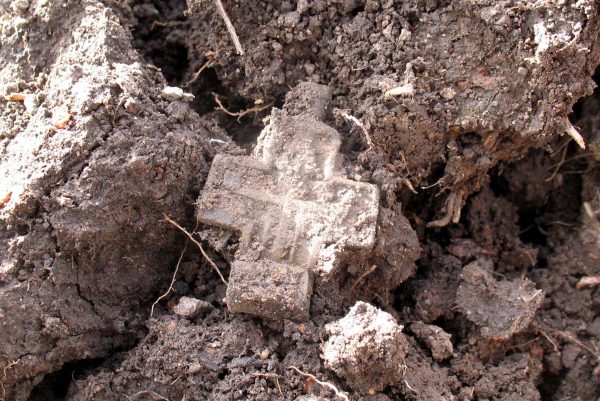 Alexander Solzhenitsyn, the Russian author who spent many years in the gulag of Siberia, bears witness to the power of the cross. After long suffering in the work camp of Siberia, he fell into despair. Like other prisoners, he had worked in the fields day after day, in rain and sun, during summer and winter. His days were filled with backbreaking labor and slow starvation. On a particular day, the hopelessness of his situation became too much. He saw no reason to continue living, to continue fighting the system. He thought that the rest of his life was meaningless since he would most likely die in this Siberian prison. His life made no difference in the world. So he gave up.

Laying his shovel on the ground, he slowly walked to a crude work-site bench and sat down. He knew that at any moment a guard would order him to stand up, and when he failed to respond, the guard would beat him to death, probably with his own shovel. He had seen it happen to many other prisoners.

As he waited, head down, he felt a presence. Slowly, he lifted his eyes and saw a skinny, old prisoner squat down next to him. The man said nothing. Instead, he drew a stick through the ground at Solzhenitsyn’s feet, tracing the sign of the Cross. The man then got back up and returned to his work.

As Solzhenitsyn stared at the sign of the Cross, his entire perspective changed. He knew that he was only one man against the all-powerful Soviet empire. Yet in that moment, he knew that there was something greater than the evil that he saw in the prison, something greater than the Soviet Union. He knew that the hope of all mankind was represented in that simple Cross. And through the power of the Cross, anything was possible.

Solzhenitsyn slowly got up, picked up his shovel, and went back to work. Nothing outward had changed, but inside, he received hope.

Years later, Solzhenitsyn’s writings enlightened the entire world, telling us not only about the horrors of the Soviet prisons, but also witnessing to the power of God and the hope of the Cross.

On the third Sunday of Lent, we celebrate the adoration of the precious and life-giving Cross. This message is appropriate not only for our journey through the Lenten season, but for our situation in Albania and for suffering people everywhere. We lift up today a sign of hope in the midst of despair.

Many people tell me that they see no hope and have no future. They say this is a cursed land. They are in despair. But remember the story of Solzhenitsyn. He also had no logical reason to hope, yet the power of the Cross is beyond logic, it is beyond reason. God offers us hope that is unexplainable.

Why do we Christians place the Cross in our Church, in our homes, in our cars? Why do we continually make the sign of the Cross, and wear a Cross around our neck? Because for Christians, the Cross has become a symbol of love, joy, hope, power and victory.

First of all, the Cross reminds us of God’s love. St. John the Evangelist tells us, “God so loved the world that he gave his only begotten son that whoever believes in him will not perish but will have eternal life.” (John 3:16) What greater love is there than to lay down your life for others?

The Cross reminds us of joy, the joy of paradise. Many hymns of our church recall how Adam and Eve were sent out of paradise because of a tree. They ate fruit from the forbidden tree. And yet it is also a tree that has opened the doors of paradise once again for all believers, the tree of the Cross.

The Cross reminds us of hope, a hope that is greater than the darkest despair. When Jesus was crucified, his disciples and followers all despaired. They had abandoned Jesus. They had betrayed him. They had denied him. They had placed all their hope in him, and now he was dead. For three days they lived in complete despair. And yet, after the resurrection, they understood the Cross in a new way. It was no longer a symbol of despair, but it was now a sign of hope for all people, a hope for new life.

The Cross is a symbol of power. Often in the world, it seems that evil conquers good and that sin is stronger than virtue. Yet the Cross reminds us that sin will not have the last say. Evil will not last forever.

The Cross reminds us of the resurrection. Evil and suffering appear to win, but then comes the resurrection. In Albania, the evil that abounds seems great, but be assured, the evil will not last. The resurrection is coming. The 45 years of communism and atheism did not conquer Albania. In the end, God prevailed and now we are in this church worshiping God, while Hoxha lies in the ground. The chaos of today will not last. God will have the last say.

Finally, the Cross is a symbol of victory. Through the death of Jesus on the Cross, the greatest evil, death itself, was destroyed. Before the Cross, the devil thought that death was his greatest weapon. All who died would enter his dark kingdom. And yet, when Jesus went to hell, the devil trembled. The Cross, which had been a tool of evil, became a power of death for hell itself. One of the morning hymns describes the devil trembling when he sees Christ himself enter into Hades and cries out, “My spirit trembles, and now I must cast out Adam and his posterity. A tree brought them to my realm, but now the tree of the Cross brings them back again to paradise.”

During these dark days of Albanian history, we must not forget the meaning of the Cross. Although events and logic tell us to despair, the Cross says something else — to hope. In the end, the Cross will prevail.

A note from In Communion: In August 2008, I asked Fr Luke Veronis where he got the cross-in-the-dirt story. He replied: “I thought that I had read the story about Solzhenitsyn in The Gulag Archipelago, but now, after researching it, I realize that I read it in a book by Charles Colson, Loving God, published by Zondervan in 1983. Colson says the story was told by Solzhenitsyn at a meeting with a group of Christian leaders back in 1975 or so.”

According to Michael Scammell, author of Solzhenitsyn: A Biography, the cross-in-the-dirt episode never happened. There is no reference to such an event in any of Solzhenitsyn’s published writings. Scammell’s biography of Solzhenitsyn, published in 1984, includes a substantial section on Solzhenitsyn’s life up to 1982, but includes no mention of a meeting with a group of Christian leaders in the mid-70s. — Jim Forest, editor, In Communion 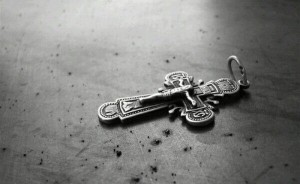 For us, victory in the name of religion is a heresy because the Christian is victorious… 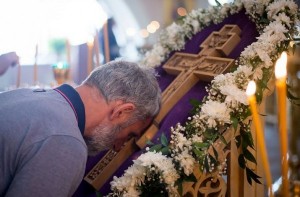 We are told: you bow down to the tool of execution? You revere a God crucified… 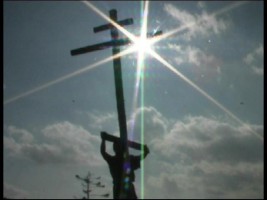 Following Christ to the End: A…
Archpriest Alexei Uminsky