What Happens if My Confession Isn’t Heard All the Way Through?

Question: What should I do if my confession isn’t heard all the way through? How can I receive Holy Communion? I’ve been going to church for a long time, but this surprised even me. What about people who’ve just started going to church?

Reply by Archpriest Alexei Uminsky, Rector of the Church of the Live-Giving Trinity in Khokhly (Moscow):

You know, it’s nothing terrible if for some reason your confession isn’t heard all the way through. We all live in circumstances in which the priest who hears confessions is in a very difficult position. Most of the time, confessions go on during another divine service. The All-Night Vigil is going on in the evening, or the Divine Liturgy in the morning, and at the same time one of the priests is performing this Mystery. This is lamentable in and of itself, of course, because at this point the priest himself doesn’t know where he is.

This is a big problem for me, too, because there are quite a few parishioners who want to have confession, and so I have to devote part of the Vigil to hearing them. At that point I’m already no longer participating in the service. If a priest might not listen to the service all the way through, and if parishioners accept that as normal, then at some point he might also not listen to someone all the way through, because he’s human. And I want to tell you that one’s attention runs out after the twentieth person. No matter how hard one tries… 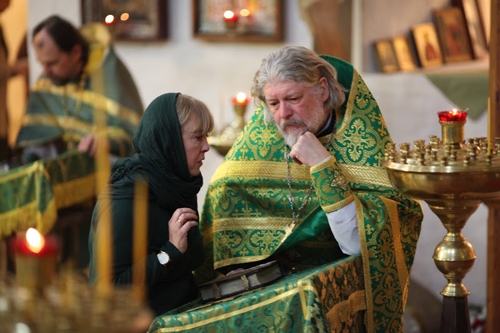 If we’re afraid because we haven’t listed our sins all the way through, then this shows a profound misunderstanding of what goes on during confession and a profound mistrust of God Himself. If you’ve approached the Mystery of Confession, then Christ stands invisibly present and receives your confession. He receives your confession not only because you’ve written it down on a piece of paper, or even because you’ve already spoken it, or if you weren’t able to say everything you’d wanted, but because He sees the disposition of your heart. He sees your profoundly serious attitude towards yourself and your desire to free yourself from sin. Obviously, no one is ever going to be able to list all of his sins to the end.

Therefore, if you came to confession and you weren’t heard all the way through, and your notes weren’t even read but just torn up, this means nothing. This doesn’t mean that this wasn’t a confession or that it didn’t happen – because you came to the Living God. A priest witnesses to your repentance to the extent that he is physically capable. Perhaps in time there’ll be a special day or evening in churches in which only confessions are heard. All other days will only be for those who, for reasons of disability or because they have many children, or for some other reason, aren’t able to participate on those days – people for whom coming to church an extra day would be a real problem. Then confession will be conceived differently on its own. Today we’ve become accustomed to a kind of bookkeeping: if I list all my sins, then everything’s all right – it means that I’ve been forgiven. But if I haven’t listen them, that means I haven’t been forgiven. But this isn’t the case. This has nothing at all to do with the Mystery of Confession.