XXXI: Prayer to the Saints

The saints are above all our heavenly friends, who can help us progress on the path to salvation, on the path to God. And only secondarily are saints those that can help us in specific everyday matters.
Metropolitan Hilarion (Alfeyev) | 07 August 2014
We continue a series on prayer, transcribed from television episodes presented on Russian television in the spring of 1999 by Fr. (now Metropolitan) Hilarion (Alfeyev) with the blessing of His Holiness, the late Patriarch Alexy II of Moscow and All Russia. 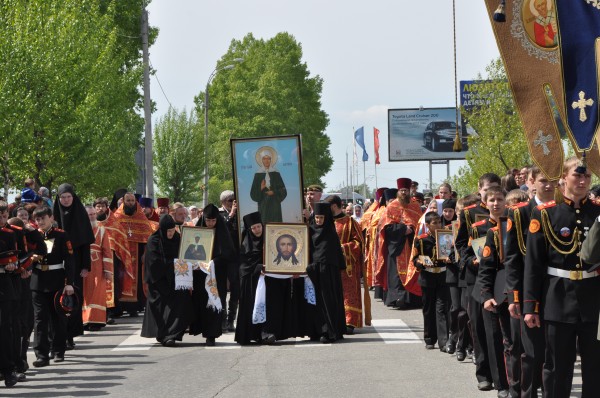 The tradition of the veneration of saints in the Christian Church is very ancient; it has existed from the very moment of the Church’s appearance, from the first years of its existence. Christian churches in antiquity were built on the graves of martyrs. And it was the blood of martyrs, according to the words of one ancient ecclesial writer, that was the “seed of Christianity”; that is, Christianity spread through the exploit of the martyrs.

The martyrs are people who showed by the example of their own life and death that man can repeat Christ’s exploit; that earthly man, for all his weaknesses and infirmities, can likewise sacrifice himself for people and for God, as did Jesus Christ. He who offered himself in sacrifice became a spiritual hero in the eyes of other people, especially in the eyes of those who knew him. The veneration of this saint began immediately after his death. The tradition has been preserved to the present day according to which an Orthodox church must have at least a small particle of a saint. One should not perform the Divine Liturgy on a simple table: it is to be performed on a Holy Table or special board into which part of the relics of a saint is sewn. The reason for this is that martyrs ant saints are the foundation upon which the Christian Church is built. We pray to saints because these were people who, although they were like us, thanks to the exploit of their lives attained deification, becoming like Christ. We pray to them because they followed the path that we are trying to follow. And the experience of many Christians witnesses to the fact that the saints hear our prayers and answer them.

I’d like to mention very briefly one negative phenomenon connected with the veneration of the saints. The facts is that some people regard the saints rather like the pagans regarded their gods: on the principle of “what saint can help with what.” Such people go to church and ask: “To what saint should I put up a candle in order to get an apartment?” “To what saint should I pray for a toothache,” etc. We should remember that the saints are not some kind of idols from which one can obtain something special. The saints are not specialists in finding apartments, in curing toothaches, or other similar things. There are, of course, saints who were doctors during their lives, and we turn to them with appeals for healing, such as the Holy Great-Martyr Panteleimon. And, indeed, through the prayers of such saints many healings do occur. But by no means should one regard the saints as a sort of fetish: we shouldn’t replace prayer to the saints, as to people who attained spiritual perfection and who can help us in prayer, with prayer to the saints as some sort of idols that are needed only for attaining specific help.