When I was studying in England, my professor – an elderly Orthodox bishop – often invited me for studies in his home. I would go to his house, and his elderly mother would open the door for me. Imagine if I didn’t greet her, if I didn’t notice her, but passed right by her into the house saying: “I don’t need any intermediaries; I only deal with the bishop.” It seemed to me perfectly natural that, dealing with the son, I also dealt with the mother.
Metropolitan Hilarion (Alfeyev) | 02 August 2014
We continue a series on prayer, transcribed from television episodes presented on Russian television in the spring of 1999 by Fr. (now Metropolitan) Hilarion (Alfeyev) with the blessing of His Holiness, the late Patriarch Alexy II of Moscow and All Russia. We hope to present three sections a week, each of which is relatively brief but substantial, for a total of thirty-two episodes. 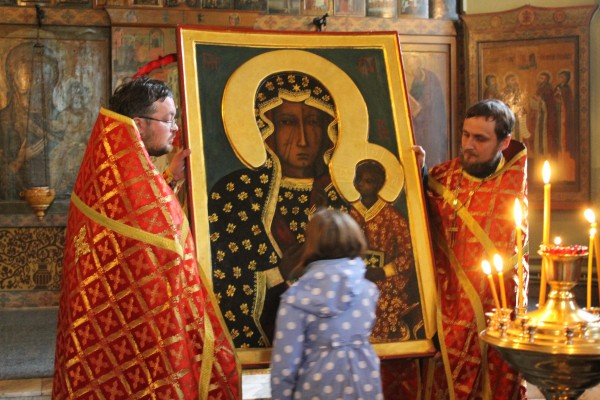 When I was studying in England, my professor – an elderly Orthodox bishop – often invited me for studies in his home. I would go to his house, and his elderly mother would open the door for me. Imagine if I didn’t greet her, if I didn’t notice her, but passed right by her into the house saying: “I don’t need any intermediaries; I only deal with the bishop.” It seemed to me perfectly natural that, dealing with the son, I also dealt with the mother. Of course, this argument is of a purely everyday character.

There are also more serious arguments. The most important of these is the experience of millions of people who show that the Mother of God listens to their prayers and replies to them; that she helps people; and, moreover, that she is indeed an intercessor for people before her Son and God.

The Mother of God is inseparable from the Savior; Her exploit [podvig] is inseparable from His. Consider that when the Angel of the Lord descended from heaven to say to her: thou shalt conceive in thy womb, and bring forth a Son (Luke 1:31), the Incarnation depended upon her agreement or disagreement. She could have said “no,” but she said “yes.” She raised the Child, brought Him to the Temple in sacrifice to God; She traversed His entire earthly life alongside Him. When Christ was crucified, she stood at the Cross, because she could not be separated from Him. She was with Him even in His most fearful suffering, because she became a participant in His exploit.

We say in prayer to the Mother of God: “Most Holy Theotokos, save us.” This doesn’t mean that we consider her to be our savior. The Savior is Christ. But we confess her involvement in the mystery of salvation, her participation in this mystery. And we understand that salvation is possible for us because the Mother of God expressed her agreement with the word of God addressed to her. And, thanks to her consent, we have access to her Son and her God, our Heavenly Father.

Most viewed articles
Life Truly Genuine and Authentic in the Eyes of God107
Patriarch Kirill: “We Should Pray for Our Lord to Strengthen Fraternal Feelings of the Peoples of Holy Rus”90
How to Deal with Sin76
The Authenticity of the Vision of Christ in the Life of Saint Silouan60
Holy Cincture of the Theotokos to arrive in France next week57
The Bulgarian Church Can Canonize Its First Patriarch47
“The models par excellence are the great hesychast saints,” says Romanian Orthodox Bishop of Oradea41
Most popular authors
Pravmir.com team137
Fr. Theodore Stylianopoulos107
Archpriest Basil Ross Aden76
Archimandrite Zacharias Zacharou59
Aurelian Iftimiu57
Ștefana Totorcea41