In 2013 Great Lent begins on March 18 and continues until May 4, inclusive. 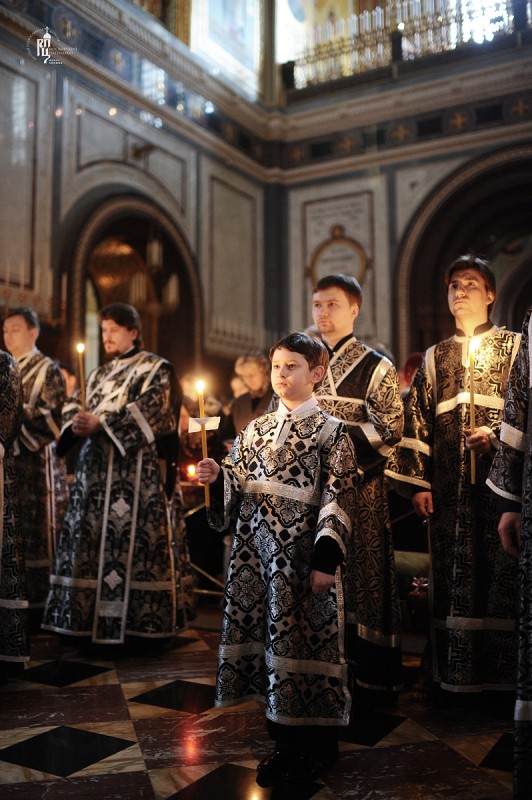 In the evening of the first four days of Great Lent, March 18 to 21,the Great Penitential Canon of St. Andrew of Crete is read in church.

After the Liturgy of the Presanctified Gifts on March 23 koliva (boiled wheat with honey) is blessed in memory of St. Theodore the Tyro.

On the second, third, and fourth Saturdays of Great Lent (March 30, April 6 and 13), the Church commemorates the reposed. The evening before (on Friday), in many churches a special memorial service called the Parastas is celebrated.

On Wednesday of the fifth week of Great Lent, April 17, in the evening (in some churches at night) the Great Penitential Canon of St. Andrew of Crete is read in full along with the life of St. Mary of Egypt – this is called “St. Mary’s Standing.” Due to the vigil wine and oil are allowed.

Friday of the same week, April 19, on the eve of the Saturday of the Akathist (the Feast of the Laudation of the Theotokos) the Akathist to the Mother of God is read at Matins.

April 28 is Palm Sunday (the Feast of the Lord’s Entrance into Jerusalem). According to tradition, pussy willows (or palms) are blessed during the All-Night Vigil.

On Friday of the first week of Great Lent, March 22, Confession is held in the evening: after the strict and penitential first week many prepare for Communion. However, those who are going to Confession for the first time or who go to Confession fairly infrequently would do best to choose another day for Confession, one on which there is less of a crowd: any Wednesday or Friday morning (before or during the Liturgy of the Presanctified Gifts), Saturday mornings or evenings, or Sunday morning.

Monday, April 29, is the beginning of Holy Week, an especially strict period of Great Lent. On these days we remember the last days of the earthly life of the Lord Jesus Christ.

On April 29, 30, and May 1, the Liturgy of the Presanctified Gifts is served for the final times. From Sunday (April 28) until Tuesday (April 30) at the evening service (Matins) the troparion “Behold, the Bridegroom cometh at midnight” is sung.

On Wednesday evening, May 1, at Great Thursday Matins, the canon beginning “At a stroke the Red Sea was parted” is read and the hymn “I see Thy bridal chamber adorned, O Savior” are sung.

Great Thursday, May 2, commemorates the Mystical Supper. The main Liturgy of the year marking the institution of the Mystery of the Eucharist is celebrated.

Great Friday, May 3, commemorates the Holy and Saving Passion of our Lord Jesus Christ. The Liturgy is not celebrated on this day. In the morning the Royal Hours dedicated to the Lord’s Passion are read. During the day Vespers with the bringing out of the Burial Shroud (Epitaphios / Plashchanitsa) is served (in the practice of the Russian Church this is most often served in the middle of the day). In the evening or night Matins of Great Saturday with the Lamentations is served.

On the morning of Great Saturday, May 4, Vespers with the Liturgy of St. Basil the Great is celebrated, after which, in some larger parishes, the blessing of kulich, eggs, and pascha begins. On this day wine is allowed.

On March 23 (transferred from March 22) the memory of the Forty Martyrs of Sebastia (from the year 313) is celebrated. For several centuries already in Russia the tradition has been passed down of baking rolls on the Feast of the Forty Martyrs from leavened dough and oil in the form of birds, which are called “larks” (zharovniki).

In 2013 the Feast of the Annunciation of the Most Holy Theotokos on April 7 falls on the same day as the Sunday of the Veneration of the Cross.

The first two days of Great Lent, March 18 and 19, are kept with special strictness: according to the Typikon, on these days there is no trapeza (meal). In practice the degree of fasting should be determined by one’s labors and the condition of one’s health. It is best to ask advice of one’s spiritual father.

Another period of increased fasting follows the Sunday of the Veneration of the Cross: from April 9 to 12, in the fourth or “middle” week of the Forty Day Fast (Wednesday, April 10, is the midpoint of the Fast).