We are not Alone in Confronting the Pagan World: On the Sunday of the Holy Fathers 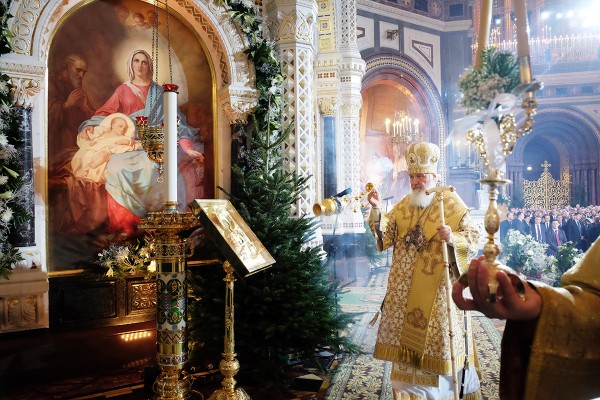 The Nativity Fast, which is now drawing to a close, draws our attention to the spiritual struggle of people who lived before Christ the Savior. The majority of feasts dedicated to Old Testament prophets take place during the Nativity Fast. And the divine services in honor of the Old Testament prophets help us to understand the meaning and significance of the ministry that they performed.

The two final Sundays before the Nativity of Christ – named in the language of the Church’s Typikon the Sunday of the Forefathers and the Sunday of the Fathers – are dedicated to all the Old Testament God-pleasers who kept the promise of the coming of the Savior into the world. They were faithful to this promise, despite the dire – from a spiritual point of view – circumstances of life then.

The small Jewish people was surrounded by a sea of pagan nations and peoples. In these countries was a powerful pagan culture that affects even us, people of the twenty-first century. The majestic temples in the Nile Valley and Egyptian pyramids as it were absorbed the power of that pagan civilization. The development of handicrafts, agriculture, military, science, the exact sciences allows you to build these magnificent buildings – all this is a great power. That before this power were for the most part humble, little-known people living in Palestine who were called Prophets. What was their strength before this shocking imagination of the people before this pagan civilization?

What was the fallacy and sinfulness of this civilization? The fact that it was based on the worship of false gods. People in search of God faced a spiritual impasse and deified that which was not God. And since it was the false worship of the false gods, it was accompanied by a dangerous, false, incorrect, not God-pleasing way of life. People lived under the law of instinct, and everything that contributed to the emancipation of this instinct, everything that contributed to its enjoyment, was the focus of attention of these ancient peoples, and everything else was to contribute to this false, pagan life.

One cannot say that the pagan environment had no effect on those who preserved faith in the one true God the Creator. Many in the nation of Israel, under the influence of all this luxury and power surrounding them in the world, bent their knees before the false gods and, most likely, were guided in this by a very simple principle: “Are we worse than others? Look at how well they live, what powerful states they have, what armies, how well they are fed, what beautiful churches and homes they have!”

Many were tempted, seeing before them the power of the pagan world. But there were also those who did not succumb to temptation – they were called the Prophets. They walked as if in defiance of the flow, remaining inwardly free and subordinate only to God. And God, in response to this courageous feat of preserving the faith, granted these people the grace of the Holy Spirit. The Holy Spirit, as we confess in the Symbol of Faith, spoke through the Prophets, and therefore their words carried Divine wisdom and power, helping people to preserve the true faith; and when the people deviated, the terrible denunciation of the Prophets helped keep the faith.

The significance of the Savior’s Nativity is that He gave the opportunity to have the gift of the Holy Spirit not only to people who were individually great and strong in the Spirit, but to every person, because through the birth and life of the Savior, through His suffering, Cross, and Resurrection, the grace of the Holy Spirit has been sent down upon us. And everyone who wishes to acquire this grace – the very same that inspired the Prophets – only needs to have faith in his heart and be Baptized in the Name of the Father, and of the Son, and of the Holy Spirit. And that which the chosen people had, we all receive. In everyone is the Holy Spirit, according to the words of the Apostle, and this Spirit is capable of admonishing us and making us strong.

The temptation of the ancient world still remains the temptation of the human race. We see how European civilization, which was once built upon Christian foundations, is gradually turning into a pagan civilization, from which the worship of the true God is being expelled; and in the place of God is elevated the cult of man, the cult of consumption. Life according to the law of instinct becomes the value that this civilization preaches. And again, as in deep antiquity, on the side of this civilization is a force that defies the imagination; riches that veil the eyes. And, probably, many people want to say: “But there it’s so beautiful; there is such strength, such riches, such pleasures! Am I really the worst of all? I, too, want to live that way.”

How difficult it was for the ancient Prophets, Old Testament Forefathers and Fathers, to resist temptation! They were alone, and fought one-on-one with the pagan reality surrounding them. But today we are not alone in confronting the pagan world. We, all together, are the Church of God, in which the Holy Spirit lives and acts. Strengthened by the Mysteries, we enlighten our mind, harden our will, and raise up our feelings. We have the strength which even the Prophets did not have: the strength of a common faith and prayer, this strength which is granted through participation in the Mystery of the Church.

But how often we lack this strength, and not infrequently we find ourselves literally crushed, broken by these external circumstances of pagan life. Memory of the Old Testament saints is given us on the eve of the Feast of the Nativity of Christ, so that we can fully appreciate everything that God in Christ has brought people, so that we can fully feel and realize what great Divine treasures we possess. These days are also given to us to strengthen our faith, realize the vanity and sinfulness of the pagan world, and do everything so that our national life would always be nourished from its Christian origins, so that our people would draw from these sources of grace-filled power, by the influence of which our culture can become the bearer of the highest spiritual values.

The Apostle teaches us that our battle is not against flesh and blood (Ephesians 6:12). Yes, indeed, Christians do not fight with people, but Christians are called to battle with sin. And may the Lord help us, Who was born for our salvation in Bethlehem, to take victory over all the forces that, both in ancient and modern times, battle with our faith. From our victory, from the victory of the human race over these elements of the world, depends the existence of the human race. That is why the question of faith, of the acceptance of Christ in our hearts, is not a side issue in our life, but the most fundamental, from the solution of which depends not only our personal profile, but the profile of the entire human race. Amen.